Towards a better prediction of solar eruptions

Just one phenomenon may underlie all solar eruptions, according to researchers from the CNRS, École Polytechnique, CEA and INRIA1 in an article featured on the cover of the February 8 issue of Nature magazine. They have identified the presence of a confining 'cage' in which a magnetic rope2 forms, causing solar eruptions. It is the resistance of this cage to the attack of the rope that determines the power and type of the upcoming flare. This work has enabled the scientists to develop a model capable of predicting the maximum energy that can be released during a solar flare, which could have potentially devastating consequences for the Earth.

Just as on Earth, storms and hurricanes sweep through the atmosphere of the Sun. These phenomena are caused by a sudden, violent reconfiguration of the solar magnetic field, and are characterized by an intense release of energy in the form of light and particle emissions and, sometimes, by the ejection of a bubble of plasma.  Studying these phenomena, which take place in the corona (the outermost region of the Sun), will enable scientists to develop forecasting models, just as they do for the Earth's weather. This should limit our technological vulnerability to solar eruptions, which can impact a number of sectors such as electricity distribution, GPS and communications systems.

In 2014, researchers3 showed that a characteristic structure, an entanglement of magnetic force lines twisted together like a hemp rope, gradually appears in the days preceding a solar flare.  However, until recently then they had only observed this rope in eruptions that ejected bubbles of plasma.  In this new study, the researchers studied other types of flare, the models of which are still being debated, by undertaking a more thorough analysis of the solar corona, a region where the Sun's atmosphere is so thin and hot that it is difficult to measure the solar magnetic field there.  They did this by measuring stronger magnetic field at the surface of the Sun, and then using these data to reconstruct what was happening in the solar corona4.

They applied this method to a major flare that developed over a few hours on October 24, 2014.  They showed that, in the hours before the eruption, the evolving rope was confined within a multilayer magnetic 'cage'.  Using evolutionary models running on supercomputer, they showed that the rope had insufficient energy to break through all the layers of the cage, making the ejection of a magnetic bubble impossible. Despite this, the high twist of the rope triggered an instability and the partial destruction of the cage, causing a powerful emission of radiation that led to disruptions on Earth.

Thanks to their method, which makes it possible to monitor the processes taking place in the last few hours leading up to a flare, the researchers have developed a model able to predict the maximum energy that can be released from the region of the Sun concerned.  The model showed that for the 2014 eruption, a huge ejection of plasma would have occurred if the cage had been less resistant.
This work demonstrates the crucial role played by the magnetic 'cage-rope' duo in controlling solar eruptions, as well as being a new step towards early prediction of such eruptions, which will have potentially significant societal impacts. 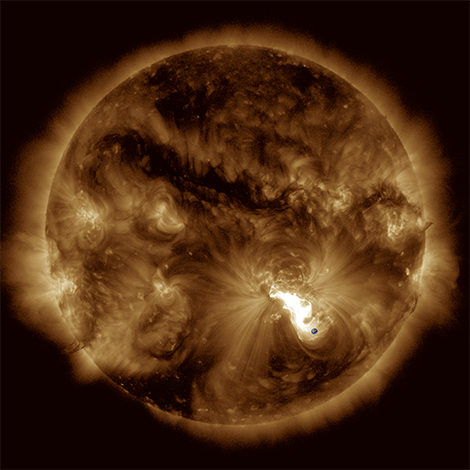 Major eruption of October 24,2014 observed by the AIA instrument of the NASA Solar Dynamics Observatory mission. Earth was added for scale. 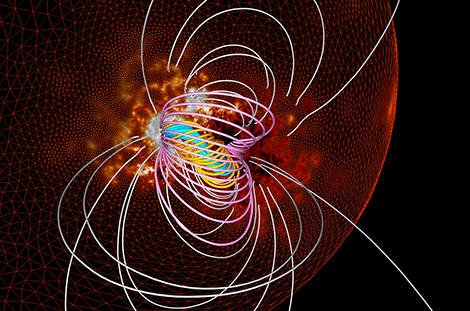 The result shows the presence of a reinforced multilayer magnetic cage (orange and pink) in which the magnetic rope (blue) develops during the last hours before the eruption. 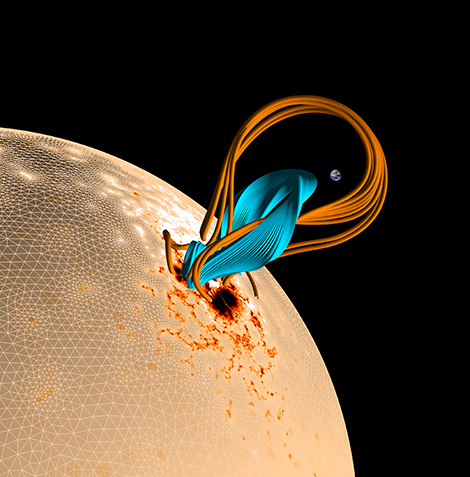 Modeling of the evolution of the magnetic rope breaking though the cage when it is weaker than the rope.

École Polytechnique, also known as L’X, is the leading French institution combining top-level research, academics, and innovation at the cutting-edge of science and technology. Its various undergraduate and graduate-level programs – Bachelor of Science, Ingénieur Polytechnicien (Master’s level program), Master’s, and PhD – are highly selective and promote a culture of excellence with a strong emphasis on science, anchored in humanist traditions. As a widely internationalized university, École Polytechnique offers a variety of international programs and attracts a growing number of foreign students and researchers from around the globe (currently 41% of students and 40% of faculty members). École Polytechnique offers an exceptional education to prepare bright men and women to excel in top-level key positions and lead complex and innovative projects which meet the challenges of 21st century society, all while maintaining a keen sense of their civil and social responsibilities. With its 23 laboratories, 22 of which are joint research units with the French National Center for Scientific Research (CNRS), the École Polytechnique Research Center explores the frontiers of interdisciplinary knowledge to provide major contributions to science, technology, and society. École Polytechnique is a founding member of Institut Polytechnique de Paris.

Today, the U7+ Alliance, made up of over 50 universities worldwide including École Polytechnique, issues ...
June 11, 2021 Read

The Master of Science (MSc) X-HEC Entrepreneurs program has set up a Steering Committee to ...
June 09, 2021 Read

Scientists from seven institutions across Mexico, Italy, France and Switzerland have been named the winners ...
June 08, 2021 Read
École Polytechnique in the Media